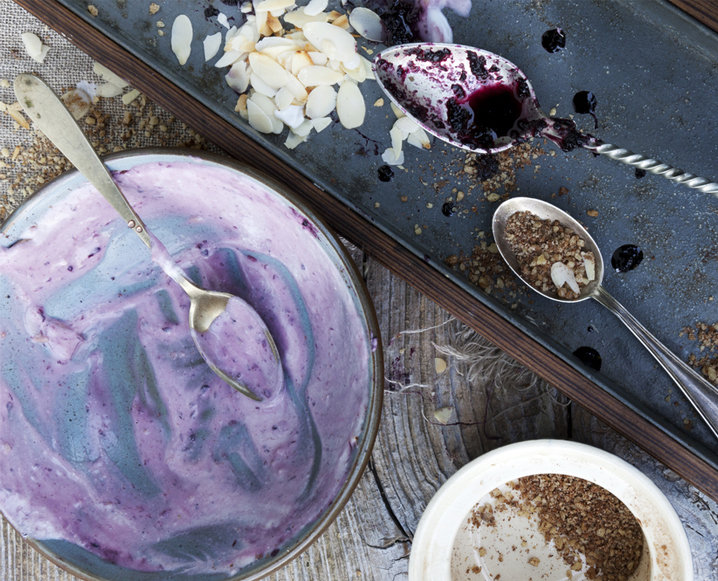 Yogurt, especially Greek yogurt, has had a resurgence in popularity in the past year. With all the major brands we grew up with taking advantage of the hype, there are other factors that may not be crossing your mind when reaching for this “superfood” – and it has everything to do with the quality of the milk these snacks are made from.

Most conventional milk comes from cows that are raised on a diet of GMO (genetically modified) grains (not grass) that are highly sprayed with pesticides, and are pumped with antibiotics, growth hormones (rbGH) and steroid hormones. These harmful substances can be found in the cow’s milk, which is then made into the yogurt found on the grocery stores shelves. The concern then arises that by consuming these toxins, a range of health complications can occur from hormone imbalance, cancer and infertility. But never fear, simply switch out your conventional dairy for organic. This way you can keep your morning favorite, while keeping your body happy too. Need more convincing? Check out our top reasons for adopting cleaner yogurt into your food routine.

Avoid Growth Hormones and rbGH: Almost all cattle entering feedlots in the United States are given hormone implants to promote faster growth. Today, there are six anabolic steroids given, in various combinations including three natural hormones, estradiol, testosterone, and progesterone, and three synthetic hormones compounds of estrogen, androgen, and progestin. In addition, cows are given recombinant bovine growth hormone (rbGH) to speed up milk production, which is prohibited in Canada, Japan, Australia, New Zealand and the 27 countries of the European Union, but not here in the U.S. These hormones have been linked to a higher incidence of cancers, including the development of prostate, breast, and colorectal cancer, low sperm counts, infertility, hormone imbalance and early puberty.

Avoid Antibiotics: Cows that are raised conventional farms often live in crowded, and unsanitary conditions, and are fed diets not native to the species. This makes them more prone to health problems. To ensure the health of the cows under these conditions, cows are treated with preventative antibiotics. The use of antibiotics is so common and done on such large scale that more than 40% of all antibiotics used in the U.S. are given to farm animals. This widespread use of antibiotics can lead to the development of antibiotic-resistant “super bugs,” which are now a growing threat to human health.

Avoid Pesticides: Research studies have indicated that pesticide residues are in fact found in non-organic dairy products. A few of the common pesticides are DDE (a breakdown of DDT), DPA, and other endocrine-disrupting pesticides. Pesticides are known to damage the nervous and immune systems, as well as reproductive organs, leading to infertility and cancers.

Protect the Animals: Organic farmers are required by USDA regulations to “maintain conditions that accommodate the health and natural behavior of livestock,” and that includes giving cows ample opportunity to graze on fresh pasture, and grass! Organic cows spend at least 120 days per year outside, getting fresh air and soaking up the sunshine. This is unlike non organic cows which are raised in CAFOs (confined animal feeding operations). Most CAFOs have very high animal densities and confine their cows inside barns or in feedlots most of the year, without room to even lie down!

Preserve the Planet: Raising cows with organic, grass-fed and natural practices is not only beneficial for the cows, but it is better for the environment as well. Organic practices prohibit the use of pesticides and genetically engineered crops, and focuses on sustainable land practices like crop rotation and composting instead. As a result, the land is better preserved, and surrounding wildlife is protected from toxic run off and exposure to sprayed pesticides.

Make the Switch: Toss out your container of conventional yogurt and get on board with the organic dairy versions. We are fans of Straus Family Creamery, Stonyfield, Smari and Clover. Or make your own Greek yogurt at home with this recipe. Then check out our 14 favorite ways to use yogurt, many of which you may never have thought of. Want to take it to the next level? Shop for organic milk, cheese and ice cream too.