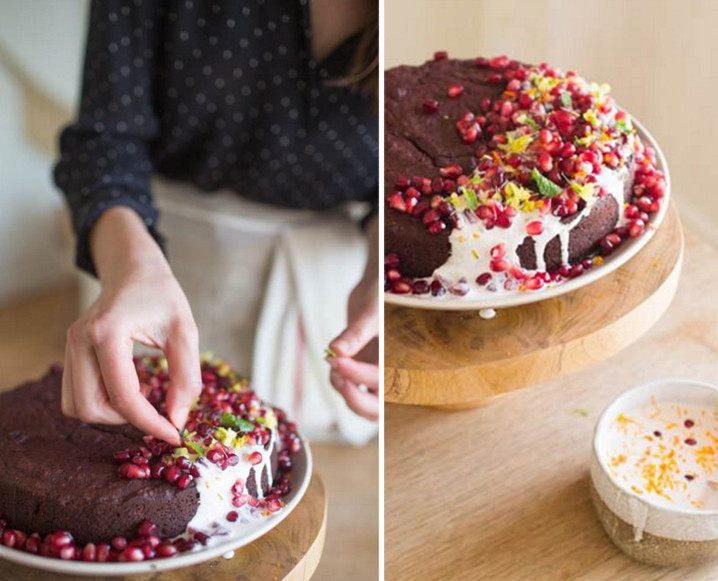 Who needs bouquets when there’s floral-infused tea to be had? Pair with a rich, gluten-free chocolate beet cake, and consider our hearts won over. We tried these V Day-ready recipe from L.A.’s Botanica at our recent cooking class at Jenni Kayne’s and couldn’t believe how delicious, not to mention beautiful, they were. (We especially love the secret dosing of veggies in our dessert). Whether for a boyfriend or best friend, we cant think of a better way to flex those V-Day vibes than with these two light, lovely, refined sugar-free recipes…

As far as menu inspiration, we wanted to make the food festive, colorful and light. We wanted to incorporate some pink and red (beet muhammara, tisane, cake) and we wanted it to be easy enough to not cause stress! It is NO fun to stress when you’re trying to do something nice for someone. Oh, and the cake was inspired by Nigel Slater’s chocolate beet cake, just with a Botanica twist (no refined sugar, gluten or butter). I’ll also add that this menu works for ANY kind of V-Day celebration, whether it’s just two people, or a group of friends having a dinner party.

Place the strawberries in teapot (or whatever you’re using to brew the tea) and pour ½ cup of boiling water over top. Leave to steep for at least 15 minutes.*

In a spice grinder or mortar and pestle, blend/pulverize the hibiscus and rose hips (roughly ground is fine here; they don’t need to be powdered).

When the strawberries have steeped a bit (the longer, the better!), add the hibiscus, rose and lemon to the pot and cover with 3½ cups of boiling water. Let steep for at least 8 minutes before straining and serving.

*If time permits, the way to get maximum flavor is to steep the strawberries, add the tea, cover with 1 cup boiling water, and steep for 30-45 minutes. When ready to serve, top everything off with another 1½ cups boiling water (to heat things back up), stir well and let rest 1-2 minutes before straining.

Roast the beets in foil at 450F until they’re soft enough to pierce with a knife. Let cool, peel, roughly chop, and whizz in a food processor until you have a coarse puree.

Lower the oven temperature to 350F. Break the chocolate into pieces and melt in a saucepan on very low heat – you don’t want it to burn! When the chocolate is almost melted, add the blood orange juice and zest and give it a gentle stir. Turn off the heat, then add the pieces of coconut oil to the chocolate mixture and leave it to rest.

Now stir the coconut oil and chocolate mixture until everything is fully melted (if the coconut oil isn’t melting, pop the saucepan over a super low flame for a few seconds to re-heat). Let the chocolate cool down for a few minutes if you’ve re-heated, then stream in the yolks and mix firmly. Then fold in the beets.

In a small pot, heat the honey until it boils. Beat the egg whites until they’re frothy, then slowly stream the honey into the whites and continue beating until stiff peaks form. Fold the egg white and honey mixture into the chocolate mixture with a big metal spoon, making sure everything is incorporated, but being careful not to overmix. Then gently fold in the flour mixture until you can’t see it anymore.

Pour the batter into a greased springform pan with a piece of parchment lining the bottom. Place the cake in the oven and lower the temperature immediately to 325F. Bake for 40 minutes; the edge of the cake should be springy and the center a bit wobbly. Set aside to cool. It’ll likely sink or crack in the center, and that is totally fine – it adds character. When the cake is cooled completely, remove it from the pan. Serve it with a dollop of tangy yogurt stirred through with blood orange juice and zest and a drop of honey, and a sprinkle of pomegranate seeds.