What the Heck Is A Castor Oil Pack? How To Use The Traditional Therapy 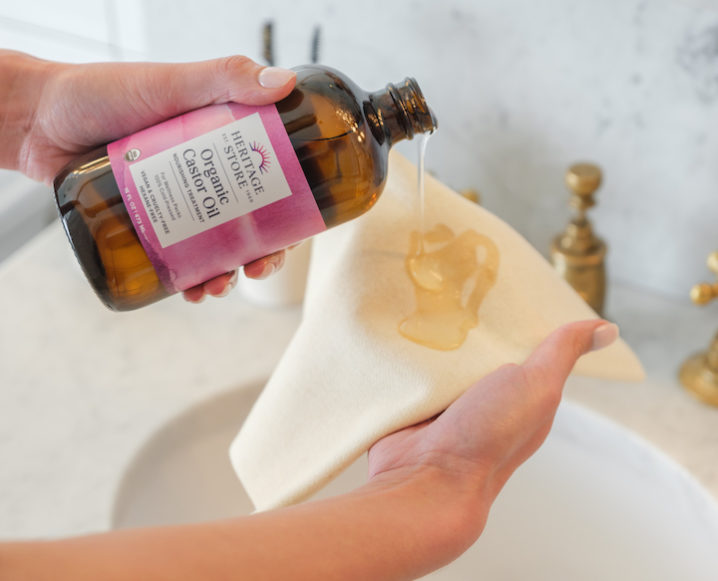 What the heck is a castor oil pack? The simple therapy has been used for eons by natural health devotees, but it may be one of the last at-home self-care practices that wellness dabblers adopt. It’s not as easy as whipping out a jade roller or downing a glass of lemon water, but castor oil packs can be simple to use once you learn how.

What’s the use of a castor oil pack? And why has it remained a staple in the toolkit of natural health practitioners world-wide? We wanted to review the basics and asked the absolute O.G. in the space, Heritage Store, if they would explore the topic with us. Since the ’60’s, Heritage Store he been the resource on the topic and the most popular brand of castor oil you’ll see on natural health food shelves everywhere.

We talked with Jennifer Rasp-Bickerton DC, MS, the brand’s Director of Education and Anya Wolfenden, MA, Director of Innovation and Formulation about the best way to use a castor oil pack at home and the history of it’s uses for health and wellness…

How To Use A Castor Oil Pack + Why Bother

TCM: To start, for the uninitiated, what is a castor oil pack?

Anya Wolfenden, MA: A castor oil pack is the application of ample castor oil on a piece of unbleached wool or cotton flannel externally placed on the body, such as on the abdominal region, joints, or muscles. This application is generally accompanied by heat, either a hot water bottle or an electric heating pad.

TCM: What are the benefits of using a castor oil pack?

Jennifer Rasp-Bickerton DC, MS: The castor oil pack (COP) is a wonderful addition to any self-care regimen. A castor oil pack can be applied to a variety of areas on the body, however most often it is applied to the abdominal region spanning the liver to the large intestine. The abdominal area is where the Peyer’s patches are located, small areas of lymph tissue found throughout the small intestines. Castor oil packs are commonly used over the gallbladder/liver area on the right upper abdominal quadrant and are a soothing component of a healthy cleansing regimen.

TCM: Naturally, as you’re connected to a natural health brand, you’ve got to be conservative about any claims.  Do you yourselves use castor oil pack or recommend them to your friends?

Jennifer Rasp-Bickerton DC, MS: I have personally used castor oil packs to ease abdominal tension over the gallbladder / liver abdominal area. Along with the addition of consuming a cleansing fiber, such as psyllium husk and a high fiber diet, it helps provide a free-flowing, calm and comfortable feeling.

I like to use castor oil packs to relax for 30-60 minutes before bed with a hot water bottle.

Anya Wolfenden, MA: I find castor oil packs wrapped around a stiff joint, or placed on the back also soothe and moisturize the skin to make it supple.”

TCM: Can you tell us a bit about the history of castor oil packs? How did they become a popular therapy?

Anya Wolfenden, MA:  Castor Oil Packs were one of the Heritage Store’s first legacy products when we began in 1969.

Castor oil is referred to as “Palma Christi,” which means Palm of Christ in Latin, because of its healing nature. It
has been used for over 3500 years in cultures all around the world for many beneficial properties. First
described in the Ebers papyrus of ancient Egypt, castor seeds have been found in tombs of Egyptian
Pharaohs and the oil has been rumored to be an ancient beauty secret used by Cleopatra.

Castor oil used as a pack on the body was recommended to be applied over the abdominal area by doctors,
naturopaths, osteopaths, massage therapists, chiropractors, and other holistic practitioners. It became a well-known therapy featured in Dr. Gott’s health advice column about bursitis of the knees, and books
such as Dr. William McGarey’s, The Oil That Heals and Heal Arthritis, Dr. Gladys McGarey’s The
Physician Within You, Dr. John Pagano’s, Healing Psoriasis, and Dr. Christiane Northrop’s Women’s
Bodies, Women’s Wisdom.

TCM: You mentioned that castor oil packs can be used in a healthy cleansing regimen. Are they beneficial during cleanses and detox protocols?

Jennifer Rasp-Bickerton DC, MS: Using castor oil packs along with healthy cleansing diets, help to provide personal focus on areas of stagnation in the body. By gently helping the natural process of elimination along, many feel more cleansed and lean as their systems re-balance, so that may be a lovely benefit if one is drinking plenty of water and getting things moving.

Over the five plus decades, Heritage Store has received thousands of testimonials from customers, friends and practitioners who have successfully incorporated them into their various cleansing protocols. The physical application of a castor oil pack on the body, similar to the therapeutic approach of massage, combines well with healthy detoxification protocols to encourage the body’s natural movement to help support the feeling of rejuvenation and vitality.

TCM: And there are also benefits for women during their menstrual cycle specifically, isn’t that right?

Jennifer Rasp-Bickerton DC, MS: Yes, castor oil packs provide a comforting addition to monthly care for women. The timing of this application a week before the cycle begins can contribute to the philosophy of self-care. Relaxing and nourishing the physical body is especially beneficial for women to feel their best during their monthly cycles. A self-care ritual of monthly castor oil packs before the cycle begins (not during menstruation)
may support a woman’s overall well-being, including a sense of balance and rhythm.

TCM: Why is the castor plant so beneficial?

Jennifer Rasp-Bickerton DC, MS:  Castor oil is produced from the castor bean (seed). The oil has a 90% concentration of an omega-9 fatty acid known as ricinoleic acid. This fatty acid is what makes castor oil so beneficial. It is deep cleansing, moisturizing, and very soothing for the skin, and an ideal oil for using on castor oil packs because of its versatility and ability to penetrate the skin. Historically, castor oil was used as a purgative to promote regularity.

Black Castor Oil is made from roasted castor beans. It is used to nourish hair follicles and helps support cleansing pores for clear vibrant skin. Heritage Store has an insistence on sustainable and ethical sourcing, combined with an interest in the traditional African method of roasting castor beans. This has led to Heritage Store collaborating with The Haitian Women’s Cooperative with Haitian-American founders, Michelle Elie and Michaelle Auguste St. Natus. The black castor oil beans are roasted based on the traditional African method and can be used on lashes, brows, as a scalp massage, and even on knees, shoulders, and elbows as a naturally fragrant moisturizer.

TCM: Castor oil packs can be messy. What are your tips for pulling it off easily?

First, gather the supplies.
Once you have a kit together, it’s easy for you to create a pack whenever you need it.

+ Heritage Store original Castor Oil that is hexane-free and cold pressed. (Hexane is a harsh solvent
and the hexane free demarcation means that the product was extracted without harsh chemicals. Cold pressed preserves the ricinoleic acid.)
+ Unbleached wool or cotton flannel
+ Plastic wrap
+ One large and one small towel
+ Wet wash cloth with baking soda and water
+ Heat source, either a hot water bottle or heating pad

How to use a castor oil pack:

Find a comfortable spot to rest and relax. Put a large towel down because the oil could stain sheets or other surfaces.

Pour enough castor oil on the unbleached wool or cotton flannel to saturate. Place the oil side down on the
abdomen or other area of the body.

Cover with plastic wrap and place a small towel over it so that you can apply your chosen heat source to the top so that it is comfortable.

This can be left on for an hour, or when your water bottle has cooled.

Gently cleanse the skin with a wipe or wash cloth when finished.

Do you use castor oil packs? Tell us your experience in the comments.

Share the post "What the Heck Is A Castor Oil Pack? How To Use The Traditional Therapy"