Recognize Release Respond: Try This Strategy To Strengthen Your Boundaries 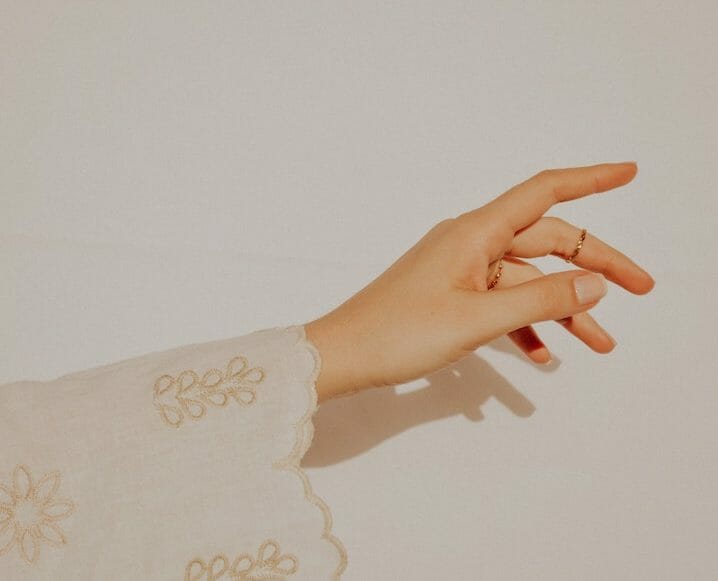 It’s been a year of radical adaptation, reflection, and change in our relationships across the board, so we welcome resources like the new Boundary Boss designed to equip us with the tools we need right now to better navigate our personal and professional lives.

Author Terri Cole is a licensed psychotherapist who specializes in a specific skill set to helps her clients, from stay-at-home moms to Fortune 500 CEO’s (sometimes one and the same now!), break out of learned behaviors that don’t serve them well — from poor boundaries to people-pleasing and passive-aggressive language.

The techniques, tools and strategies Cole teaches in Boundary Boss are invaluable for all of us these days as we construct new rules in the workplace and at home.

If you’re looking to thrive, not just survive, these changing times, we recommend the book to help you get clear about your personal goals, learn to communicate them well, and eradicate all guilt. We especially love that Cole drops the word over-functioning right out of the gate — a term we recently picked up on earlier this month and shared here.

The below is an excerpt from Boundary Boss all about one of Cole’s favorite tools, the Recognize-Release-Respond strategy to helps us navigate conflict and express ourselves with self-assurance.

Use this strategy to navigate conflict and express yourself with self-assurance.

Once you get clarity on what’s a definite “nope”, you will have an easier time knowing what to keep and what to discard. To help you know your preferences, desires, and deal-breakers, check out the exercises in the book. 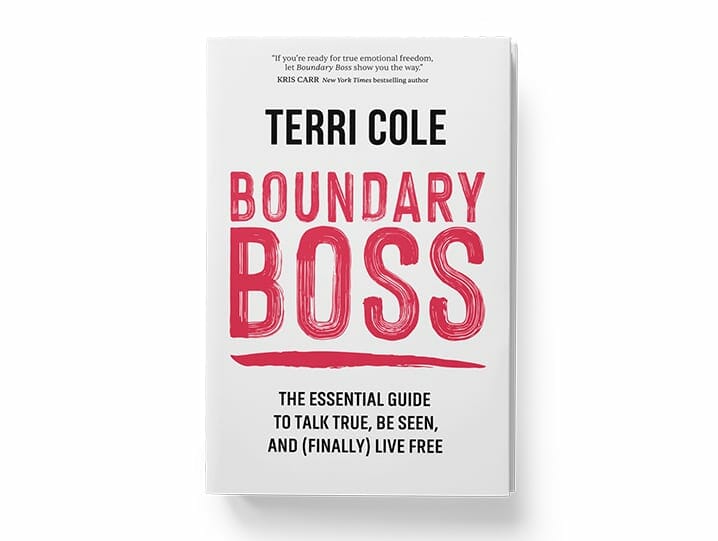 Learning to employ the Recognize-Release-Respond strategy will help you navigate conflict, express yourself with self-assurance, and establish new neural pathways to boot. This is one of the Boundary Boss strategies that builds the foundation for a life that resonates with your desires.

Recognize. What’s not working for you? How do you feel in your body? Are you reminded of a historical situation, and is that contributing to the sensations in your body?

Focus on you and your feelings, instead of judging and making the other person wrong or bad. This is about increasing your self-knowledge and understanding what is  good for you — and what’s not. Listening to your body can prompt you to get curious about your experience and also to interrupt your normal way of operating, which creates the opening for something better.

Release. Be brave and willing to step out of your comfort zone. Find and release the physical feeling by  breathing deeply into that spot until it expands. Let go of what’s familiar, whether a limiting belief or an old behavioral pattern.

Identify any transference, or ‘Repeating Boundary Pattern’. Remember that now is not then. Tell  yourself, “That’s just old stuff,” and let it go so that you can be in a more thoughtful and strategic mindset.

Respond. Choose to speak and act from a more mindful and conscious place. Make a simple request. State your preference, desire, or deal-breaker. Take a new action.

Now that you understand the importance of establishing new behavioral patterns — and how to do it — let’s look at how the 3Rs worked for Magdalena and the shame that came up for her from unwanted attention she often received in public.

Deep in her unconscious, Magdalena believed she was inherently unworthy. Know that if you have a deep-seated belief, as she did, your unconscious will always be scanning your environment for evidence to support your claims. I like to say that the unconscious mind is the very best executive assistant you’ve ever had. (“See, boss, you’re right;  they are making fun of you.”) To silence that disempowering message, Magdalena first recognized that there was a problem through her body  wisdom. This was the beginning of interrupting the unwanted pattern.

Her first clue was the constriction she felt in her chest as she walked down the street. By becoming more mindful through a regular meditation practice, Magdalena started to pay attention to her  visceral instincts. As a result, she discovered that she felt anxious before hearing anything from men on the street. True, she felt a million times more anxious after, but recognizing that these feelings were present in advance of unpleasant interactions was telling. Energetically she was bracing for the unwanted attention, and that anticipatory energy was playing a significant role in her experiences.

Magdalena started to explore why she didn’t love her body and all the thoughts and feelings that accompanied her body shame. Though she was not in relationship with any of the catcalling strangers, her issue was a boundary issue. She felt inhibited walking through the world, which is not the BB way, nor the way I knew she could be. Many people operate under the assumption that boundaries are about keeping unwanted behavior out, which is true to a certain extent. More importantly, though, they protect your sacred space within.

Magdalena couldn’t control the catcallers, but she could change her internal dialogue and therefore her experience, to protect herself. As we learn in chapter 5, we always have a hand (conscious or  unconscious) in writing our own story. And our internal reality, self concept, and self-identity are all informed by this story. Magdalena’s narrative of being unworthy was something she could change.

In my office, Magdalena began to develop genuine acceptance and love for her body. She looked at all the ways in which her body allowed her to enjoy her life. She was able to dance salsa, savor her  favorite roasted rosemary chicken dish with potatoes au gratin, and admire the beauty of nature. None of this would be possible with out her body. In becoming more self-loving, Magdalena was able to  release her negative thoughts and open her mind to having a less charged and more empowering experience. She was starting to understand that her happiness was much more dependent on what she thought than on what other people did or didn’t do.

In changing her response, Magdalena opted to tell a new story.  The next time she heard a man say, “Whoa, girl. You look hot!” she smiled and said the same affirmation to herself: That’s right. I do have a beautiful bod. Same butt, same block, same blow hard, but a whole new experience.

The only thing that changed was her mind, allowing her to reach for a more freeing and expansive way of interpreting events.  That first experience was super powerful. The new, affirming body story sparked a general sense of enthusiasm, and in time, she began oozing confidence as she walked down the street.

Exercise: Use the 3Rs strategy (Recognize-Release-Respond) to recognize old reactions, release physical symptoms and transferences, and then respond with mindfulness that is aligned with the outcome  you desire.

This shift in perception had a profound domino effect on other areas of her life. She took more initiative at work and decided to put herself out on the dating scene. I could see a tangible shift in how  she carried herself even in my office. She sat tall and radiated self assurance and vibrancy. Finally, Magdalena felt like the goddess she always was, all because she decided to put in the work required to  learn a better way of relating to herself.

While Magdalena’s boundary issue did not involve loved ones  or colleagues, the same principles apply with the people we know  and interact with on a more intimate level. For example, a woman whose partner is perpetually committing them both to plans she  doesn’t like could use the same three-step strategy:

Recognize how she’s actually feeling in the moment, and use this intel as a prompt to interrupt her default reaction. (Silently upset and sick to her stomach.)

Release any old charge that’s based on a past event or limiting story. (I feel invisible like I did with my father/sister/coach,  but I don’t have to let my past inform my present.)

Many of us are prone to assign negative meanings to interactions and experiences we encounter on a daily basis. Those interpretations then dictate our emotional responses and the ways they impact us. Remember, “truth” is subjective. Perspective is where it’s at.

The In-Between: About the Discomfort of Changing Our Habits

After reading this, you might be feeling a little raw or even naked, like, Why did Terri take away all my weapons?  But listen: using indirect, avoidant, or any other ineffective way of communicating may have been a  familiar modus operandi in the past, but let’s go wide-angle lens here. Although the old ways may be firmly established in the neural  pathways of your brain, they have not actually been working for you. You know too much to revert to the defense mechanisms and  straight-up dysfunctional strategies from the past, but you have not  quite mastered the new skill set. I call this phase of personal transformation the In-Between.

You went all the way down into the metaphorical basement and flipped on the floodlights. You cannot unsee what you uncovered.  That also means you cannot just go back to the old way of being— even if you wanted to. And trust me, you don’t.

Typically, the In-Between is a phase where resistance can crop up.  Yup, resistance is a game of whack-a-mole until these new behaviors become more fully integrated. That’s okay. What’s new can also be very uncomfortable (hence, resistance!). This is a perfect time to flex those BB muscles. Remember, you are stronger than you think.

Taking small, consistent steps to assert yourself will speed up your time in the In-Between. You’ll get to the other side of your dysfunctional behavior faster.