Take It Outside: 14 Tablet Hotel Gardens For Summer Sun 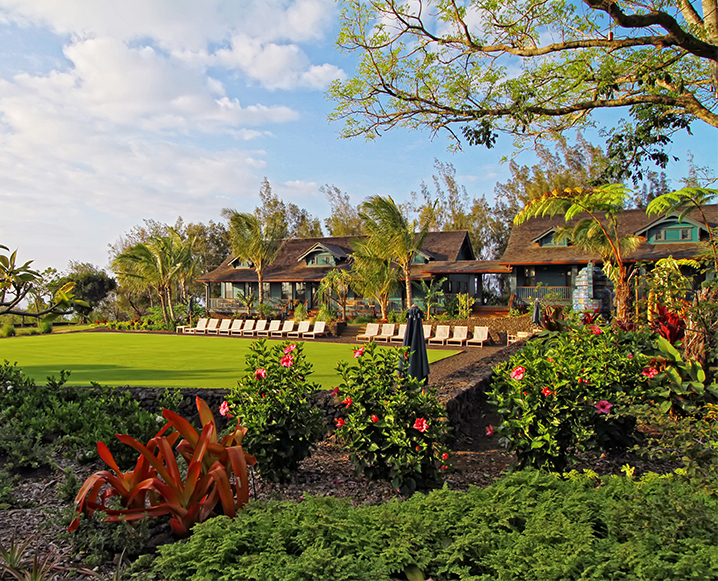 April showers bring May flowers…which then bring us a summer filled with lush greenery, bountiful blooms, and sun-soaked gardens as far as the eye can see!  No matter if your daily dose of plant life lives on your desktop wallpaper or you’ve got your own urban oasis right in your own backyard, summer is the perfect time to get away from city life and enjoy gorgeous gardens and greenery for days. From a 17th-Century farmhouse to six acres of Hawaiian bliss (where going barefoot is highly encouraged), each of these hotel properties awakens the senses and brings out our inner garden fairy. This summer, take it outside and get your green on with these picks from Tablet Hotels – no gardening gloves required.

Whether we’re serious green thumbs ourselves or can’t even keep the basil plant on the windowsill alive, most of us can appreciate the multi-sensory pleasure of a world-class garden. It’s especially welcome at a hotel, where all too often the hospitality experience is confined to the indoors. We’re putting the spotlight on fourteen of our favorite hotel gardens… 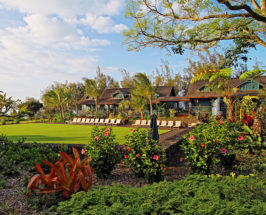 Maui — Comprising six acres of gardens and lawns and breezy woods along the coast of Maui, Lumeria is a lush, quintessentially Hawaiian hotel. (Fun fact: it was originally built as a retirement home for aging pineapple executives.) Guests are encouraged to go barefoot, the better to feel the grass beneath their feet, and to take a few tastes of fresh fruit, warm from sunlight, as they stroll the property.
Book my room at Lumeria Maui → 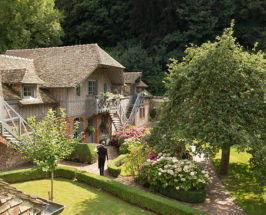 Honfleur, Normandy — We’re not normally big name-droppers, but we think it’s a pretty good endorsement of a hotel’s gardens that Claude Monet used to hang out there, painting the ponds and the flowers. Today La Ferme remains every bit the rural idyll that it was back then; squint your eyes and it’s almost like reliving your favorite Impressionist masterpiece.
Book my room at La Ferme Saint Simeon → 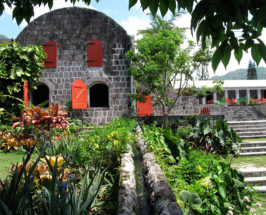 Nevis — It almost seems fated that a man named Raymond Jungles would have become a landscape architect, and given what he has done with Golden Rock, we’re glad he did. Each of the eleven cottages is surrounded by tropical greenery, and meandering paths (shared with friendly feral donkeys) take guests through a jungle landscape that feels only halfway tamed.
Book my room at Golden Rock Inn → 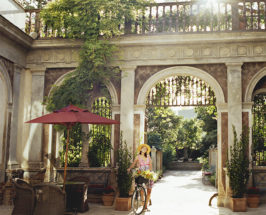 Bernalda, Italy — Maybe he picked it up in his vineyards; wherever he got it, director-winemaker-hotelier Francis Ford Coppola has a knack for creating hotels that are profuse with plants and flowers. At Palazzo Margherita, his 19th-century-palazzo-turned-boutique hotel in southern Italy, the light filtering through all the branches and leaves lends a cinematic quality to what’s already quite an atmospheric hotel.
Book my room at Palazzo Margherita → 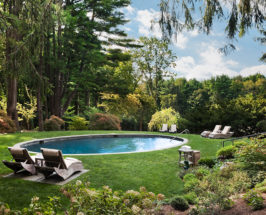 Lenox, Massachusetts — One of these days we really need to take a break from lavishing praise on the Wheatleigh, but when a hotel sits on a sprawling Frederick Law Olmsted–designed park, with one beautifully tended garden after another set against the backdrop of the Berkshire mountains, it simply wouldn’t be fair to leave them off the list of our favorite hotel gardens.
Book my room at Wheatleigh → 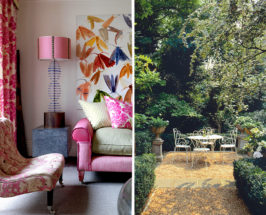 London — It’s just down a side street in South Kensington, but Number Sixteen’s secret-garden atmosphere makes it feel more like someone’s manor in the English countryside. Even in the interior, the décor runs to birds and flowers, a motif that few designers could pull off as well as Kit Kemp does. High tea served amidst the trees and hedges is the perfect way to take it all in.
Book my room at Number Sixteen → 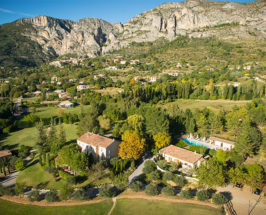 Moustiers-Sainte-Marie, Provence — Before it was an inn, La Bastide de Moustiers was chef Alain Ducasse’s home in the country, a 17th-century stone house in a field of lavender and olive trees. Today the hotel is practically bursting with herbs and veggies, all overseen by a master gardner who chooses the day’s best produce and delivers it each morning to a spot beneath the kitchen window.
Book my room at La Bastide de Moustiers → 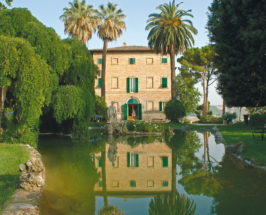 Castel di Lama, Italy — Each of the two ancient buildings housing the guest rooms at this mellifluously named hotel has a garden of its own. The one surrounding the Relax Villa, originally a medieval fortress, was first laid out by the 19th-century botanist Ludwig Winter, while the poolside Mediterranean garden next to the Residenza San Pancrazio dials the pleasure-factor of a swim up to 11.
Book my room at Borgo Storico Senghetti Panichi → 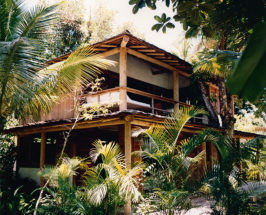 Trancoso, Brazil — There’s an element of half-controlled chaos about the gardens at Uxua Casa, with cottages tightly in the grip of flowering vines, outdoor bathrooms being encroached upon by ferns and even the occasional fruit tree growing straight through a building’s roof. It’s the sort of thing the 19th-century Romantics would have liked, translated for a casually cool beach hotel in Trancoso.
Book my room at Uxua Casa Hotel & Spa → 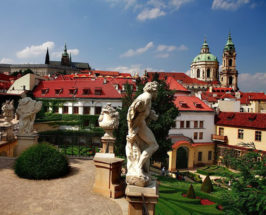 Prague — It’s not every hotel’s backyard that’s listed as a UNESCO World Heritage site. The Baroque terraced garden at Aria Hotel, complete with expansive views of the city beyond, is well worth a visit even for those who aren’t staying overnight. Of course if you are sticking around, it just gives you all that much more time to admire the elaborately sculpted hedgerows.
Book my room at Aria Hotel → 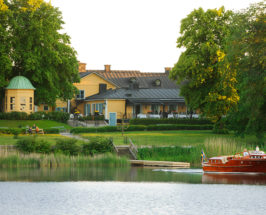 Stockholm — For a hotel in the middle of Stockholm, Stallmästeregården offers up a surprisingly pastoral scene. Once a stable-master’s farm supplying the royal family, the grounds remain awash in green today, from the lush lawns and centuries-old shade-trees to the herb garden that supplies the kitchen. And the 17th-century farmhouse that houses the hotel itself is nearly as sunny as the gardens outdoors.
Book my room at Stallmästeregården → 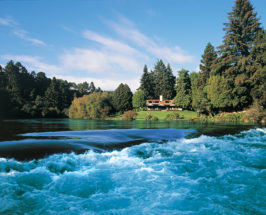 Taupo, New Zealand — Listed as a Garden of National Significance in a country that’s not exactly short on spectacular flora to begin with, Huka Lodge’s backyard feels like some enchanted woodland from a fairytale. The property spans seventeen acres along the Waikato river, three hundred meters upstream from Huka Falls, and the suites themselves are set amongst the trees.
Book my room at Huka Lodge → 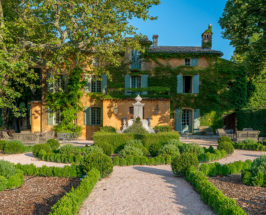 Tourtour, Provence — It’s all we could do not to fill our entire list with Provençal hotels. This 18th-century country house is the former residence of the artist Bernard Buffet, comprising a practically endless series of courtyards and gardens. After spending a day strolling and sniffing, a meal at François Martin’s intimate restaurant rounds out the full-sensory experience.
Book my room at Domaine de la Baume → 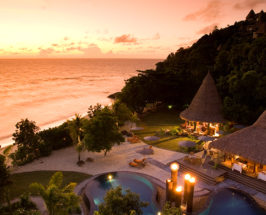 Anse Louis, Seychelles — A subtle masterwork by the landscape architect Bill Bensley, the grounds of Maia Luxury Resort hardly feel mettled-with at all. If it’s not too much of a stretch, we think the classic sculptor’s metaphor applies; Bensley hasn’t so much built something up from scratch as he’s whittled away the excess, revealing forms that seem to have always been waiting just beneath the surface.
Book my room at Maia Luxury Resort →